When it comes to high-quality martial arts gear, few names carry the clout of Century Martial Arts. Founded in 1976, like so many businesses we love, it began in the founder’s garage and has gone on to become a trusted manufacturer.

The BOB punching bag (Body Opponent Bag) is yet another quality model from this brand. If you’re looking to hone your sparring techniques through more targeted practice, this may be the equipment you’re needing.

It’s ideal for self-defense practice because you can target your practice opponent with greater force where it’s going to hurt the most, something you would not want to do if your opponent were a human in a padded suit.

In this Century BOB review, we’ll explore who would benefit from this product. And I’ll show you how to overcome common complaints to get the most out of this body opponent. 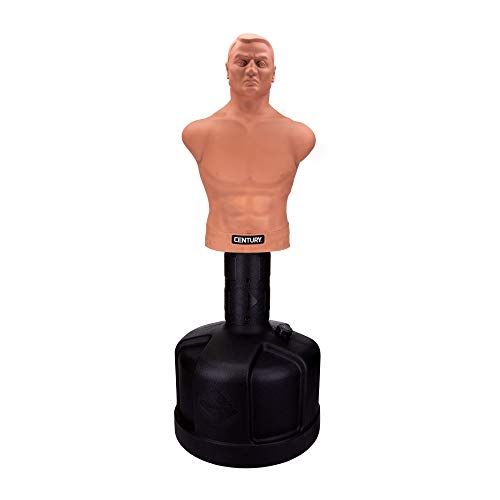 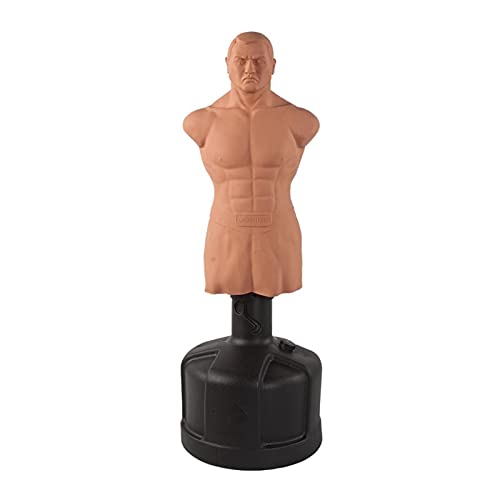 The Century BOB training body is a realistic vinyl sparring partner that stands five to six and a half feet tall, thanks to its easy-to-adjust design. It is quite the upgrade over the more basic standing punching bags most people are used to.

The soft yet stable vinyl skin on a complete male head and torso makes the perfect striking surface for everything from the uppercut to the reverse jab the sidekick.

Its 270-pound weight gives you the realistic impact sensation you need not hold back. But because most of that weight is water or sand weight that you add once you have it in place, you don’t have to worry about high shipping cost or team lifting when you need to store it. You can empty it.

So what’s the Century BOB comparison to the BOB XL. Here’s what you need to know.

If you or some of your students are on the taller side, then you may find the Century BOB XL a better fit.

The XL can shrink down to five feet like regular BOB, but it can expand to nearly seven feet tall. The XL’s base is a little larger (40″ x 15.5″ X 10.5″) to handle that added height. It otherwise weighs the same. The XL also has a one-year warranty as opposed to 90 days.

Many people say they chose the BOB XL because they didn’t want to find out after the got it that the height mattered to them, but they also note that the XL costs more, so it’s an individual decision to make.

With that said, a Century BOB review wouldn’t be complete without taking a look at the pros and cons of the product.

Pros & Cons of the BOB System

As you would expect, the BOB is a solid piece of craftsmanship by Century. Some of the benefits users talk about the most include:

More Fun to Hit/Kick – It’s just more fun to kick something that looks humanoid. Get a simulated feel of hitting a real person without the lawsuits. Be more prepared for a real encounter.

Great for Practicing Form – The BOB is ideal for improving form over brute force. Practice combos and make more measured movements to subdue an opponent. In most real-world fighting situations or a tournament, proper form will matter, especially if your opponent has any skill.

Well-Designed – The BOB is sturdy. Some users say they’ve had theirs for six or seven years. Of course, that depends mainly on how much you use it. BOB is built to last with high-quality vinyl and a solid foundation.

Do Things You Wouldn’t Do to a Sparring Partner – You wouldn’t gouge out a sparring partner’s eyes or knee them in the groin, but these are essential fighting skills to practice if you were ever in a life-or-death fight. The BOB system allows you to practice these vital skills.

Throughout this Century BOB review, we’ve touched on Century BOB comparison to heavy bags. But let’s look at them side by side.

A heavy bag is generally a one-size-fits-all solution. A BOB is adjustable so that you can work with various heights and different size students can practice on heights they’re likely to face in competition.

BOB is more pliable than a heavy bag. A soft dummy isn’t ideal if you want to toughen up your shins. But it can be a relief if you’re going to spend hours perfecting a single combo.

Century BOB Instructions – Setup and Use

How to Set Up the BOB Punching Bag

Century BOB instructions are straightforward. To set up BOB, simply screw BOB into the black base. This base extends up into BOB’s torso for maximum support, secured with six screws.

The washers on the nuts are vital. They distribute the force of a tug on the vinyl that might otherwise tear BOB from the base. So be sure to use them.

Move him into the desired location. Fill the base with water or sand and screw on the lid tightly. If you’re concerned about spills, remember you can fill BOB outside and then turn him on his side and roll him into place.

BOB has seven height adjustments. To raise it, just twist BOB to the side and lift or lower.

Century BOB instructions may be easy, but getting the most out of BOB will take some practice. As my Century BOB review continues, I’ll share some moves you can practice on BOB. These will help you explore his functionality.

How to Use the BOB System

Start with Some Basics

Now, let’s do a short Century Bob training combo. Left-right punch to the face. Duck, just as a real opponent might throw a face level punch and then left to the abs, followed by a left uppercut.

Whether you’re a South Paw or not, this one can throw an opponent off-kilter. Practice several times. And reverse.

You’re ready to proceed to more complex forms. If you choose to kick BOB, remember to get your foot up to avoid kicking the post. Lower BOB if needed and work your way up.

Is a Century BOB Worth It?

While not ideal for indiscriminate, brute force practice, it’s perfect for more targeted training. It’s great to perfect your form, accuracy, and stamina while providing the realistic feedback a good dummy provides.

The BOB system’s adjustability is an added bonus. With a quick twist to adjust the height, you can move from eye-level punching to high kicks and punches simulating a taller opponent.

So what’s our verdict on the Century BOB, is it worth the price over traditional standing punching bags? Our vote is a solid “Yes”, thanks in part to BOB’s durable, stable, and realistic training qualities.

Full Disclosure: As an affiliate, I may earn a commission from purchases made through the links on this page.

Thomas has spent over a decade teaching and growing Boxing and MMA through his writing. His goal is to teach and inspire with the unique discipline & health benefits that combat sports can provide. More About Us.