As an affiliate, I may earn a commission from purchases made through the links on this page.

A section of lot is walled off by a tall wooden fence.  Energy hums under yellow spotlights – beers clink, bursts of laughter, children shriek.  A massive canvas roof tents over the enclosure.  It’s not a traditional definition of ‘stadium’, but the heart is identical: A square enclosed by four ropes, raised above the plastic seats.

Flo and John are outside the main tent, under a shelter inside the wall. They fidget, knees bouncing.  The team mills about in matching t-shirts, making small talk.  “He came and sized me up,” John says. “The guy has shins like fucking tree trunks!”

“He came and sized me up,” John says. “The guy has shins like fucking tree trunks!”

In a plastic seat under the sky between the sheet metal lean-to and tent, I feel the first rain drops; heavy, full drops.  The local men recognize this and immediately lift chairs over the rail around the tent, the women and children scurry for shelter.   The downpour is immediate.  Rain hits the compacted dirt so hard, puddles spray three feet upward.  Wind drives the rain sideways, around the roof.  At the edges of the arena, we are quickly soaked until squished three rows towards the ring.  The stadium is packed, the announcer opens up on the tinny speaker, “LLLlladies and Gentlemen…”

Muay Thai kickboxing is the Art of Eight Limbs – legs, knees, elbows, fists – all used to beat the shit out of your opponent. A brutal sport, but you’d be remiss to think its only brawling.  There’s an intricacy to it, almost like chess, definitely a dance.  Opponents sway cobra-like towards each other, looking for an opening, feinting, then strike with vicious speed and accuracy.

Often only one or two strikes are landed, then guard reset.  There’s a lot of bone on an elbow or knee – catching a well-timed counter to the face checks any reckless aggression. I’ve seen a fight end when a flashy fighter expended all his energy into a patient, well-guarded opponent.

Fourth round, a perfectly timed spinning-heel to the liver dropped the flashy fighter.  Although he recovered, it was on heart alone – his body had quit, he was a stumbling mess. 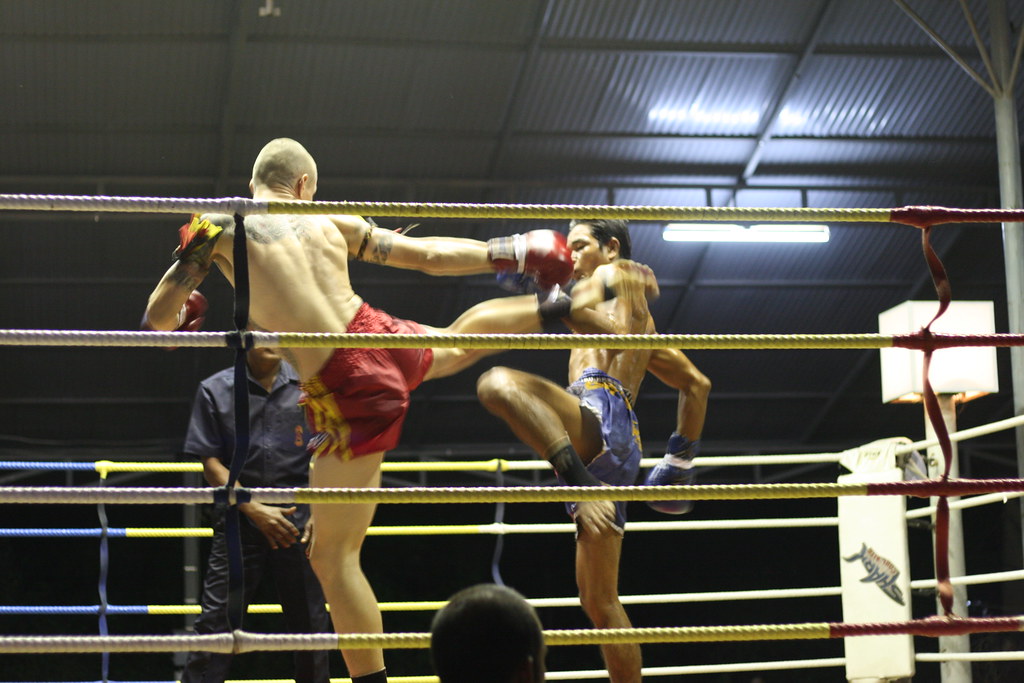 Heart is what differentiates the fighter from the true warrior.  Implicit in this is a deep respect for the opponent and sport. Muay Thai is steeped in ritual.  Shrill, frantic pipe music, Sarama, pierces the damp air of the boxing stadium. Opponents don Mongkol, headbands blessed by monks, and Praijoud, arm bands.

John, my Australian friend, wears a black cape emblazoned with our gyms logo as he steps into the ring.  He’s a tall, bald, mid-thirties.  Months of training have bunched muscle and sinew all over his skin.  He begins the ritual prayer, his opponent mirrors him – right hand on the ropes, counter-clockwise they trace around the ring, stopping at each corner to pray.  The ring is sealed from the outside influence.

Anyone who’s been in combat sport can tell you, no matter the size of the crowd, once you’re in the ring, there is nothing more than you and your opponent.  This makes the Wai-kru all the more impressive.  John kneels low, bobs and sways, preforming the dance designed to channel strength, stretch muscles, and intimidate opponents.  After one final blessing from the coach, the Mongkol is removed (never to touch the ground), and the bell rings.

The first round is always a feeling out, testing movement and distance with swift kicks, the occasional jab.  Thai men in the crowds frantically swap bundles of cash on bets.

Flo doesn’t play by those rules.  She’s doesn’t have time for feeling out her opponent.

“What I’m most scared of,” she said earlier, “is having to go all five rounds.  I’ll get so tired!”

Immediately Flo stormed forwards, piston arms pummeling her opponent.  With experience to match the power of Flo, the Thai woman locked her in a clinch to render punches ineffective.

Flo is a powerhouse, though, and bulled her into the ropes, forcing the ref to break them apart.  Flo was wrong about her abilities.  She kept up the relentless pace, hand combos ended by heavy kicks. Not only did she win, she survived all five rounds, overcoming her greatest perceived challenge.

I’ve been in Muay Thai fights – amateur, safely geared up – but the adrenaline is insane.  You can’t pull in a full lung of air before the oxygen is gone, your heart beats so hard it hurts.  Limbs go rubbery, all the control you drilled vaporizes like the distant crowd.  John, in his first fight, marched in calm, collected.  His opponent, tattooed head to foot, had a veterans composure.  It looked to be a close fight until John connected with a trunk-chopping kick to the midsection, toppling the Thai.  After a second round of thunderous kicks to the side, John won by TKO.

The team rejoices, everyone wants a piece of the victorious warrior.  They move as if floating, despite limps and bruised ribs.  It’s a terrifying experience.  There’s never an easy fight when the danger of serious injury is real.  But the moment is incomparable – once you’re in that ring, in a world of just you and your opponent, and there are only eight ways out.

Jordan Kovacs is a Canadian freelance writer, and Muay Thai practitioner. He studied Creative and Professional Writing at the University of Victoria, and is currently traveling around South East Asia.

Southpaw vs Orthodox Stance: Differences & Advantages
The 5 Types of Boxing Styles (Best & Hardest)
Types of Punches in Boxing (Numbers 1-6)
How to Break in Boxing Gloves (The Right Way)
Boxing with Braces: What You Need to Know
Boxing Gloves vs MMA Gloves – 5 Critical Differences